MYTH: The Nordic Model hinders the global fight against HIV

It’s sometimes claimed that the Nordic Model hinders the global fight against HIV, and that full decriminalisation of the sex trade is a more effective means of reducing its spread. Indeed, this is what the WHO recommends. In this article, we show that the modelling studies on which this recommendation is based are flawed; that the Nordic Model is incorrectly conflated with prohibition; and that the recommendation ignores other health risks of prostitution and the negative impact of full decriminalisation on the status and safety of women and girls. Finally, we take a brief look at how the WHO and UNAIDS came to recommend this approach, which is in direct conflict to binding UN human rights treaties.

The WHO (World Health Organisation) recommends that countries fully decriminalise “sex work” because, they claim, this reduces the spread of HIV:

Similar assertions were made in The Lancet in 2014.

The assertion that full decriminalisation leads to a decrease in HIV is justified by modelling studies. According to the Centre for Diet and Activity Research (CEDAR) these “can be cheaper and quicker than real world studies and do not require the intervention to actually be implemented.” [Emphasis added.]

In other words, the WHO recommendations are based on a theory that hasn’t been demonstrated to be correct in real life.

Modelling studies are used successfully in weather forecasting. But there are key differences between modelling weather and health outcomes. The weather provides clear and unambiguous feedback – which means the modelling can be continually adjusted in the light of practical results.

When modelling long-term health outcomes there is seldom such clear and rapid feedback. Moreover, there are many complex factors that directly or indirectly affect people’s health and resistance to disease, including social, economic, and political systems.

In The Pimping of Prostitution, Julie Bindel reports that Dr Michael Shively analysed the claim that full decriminalisation cuts the spread of HIV and concluded that the evidence does not support this. Even if condom use improves significantly after full decriminalisation (which has not been proven), the demand for prostitution typically increases when it is legally and socially sanctioned in this way – and this cancels out the benefits of any increased condom use. He says, “Risks might decline, but if the pool of people at risk expands, the safety gains are offset, at least in part.”

The modelling did not consider that full decriminalisation usually leads to an increase in the sex trade. It made other incorrect assumptions, such as that those in prostitution have access to medical and psychosocial support services, and that there is an immediate decrease in violence after full decriminalisation.

In practice, support services tend to dry up after full decriminalisation – because prostitution’s no longer seen as a problem – and many countries have patchy and inadequate health care. There’s also evidence that violence actually gets worse because punters expect more and believe they have the right to do whatever they want, and get angry when thwarted.

For example, in written evidence to the Home Affairs Select Committee, the Sex Work Research Hub argues against the Nordic Model, claiming that “data from multiple countries linked criminalisation of sex work with up to a five-fold increase in risk of HIV or other STIs.” However, the research referenced was not conducted in a country that has implemented the Nordic Model, but rather where all parties are criminalised.

This is disingenuous because the Nordic Model decriminalises prostituted individuals and provides services to help them exit, along with access to sexual health care and condoms. We would therefore expect the Nordic Model to have a very different impact than countries where selling sex is criminalised and the women are targeted by the police. In addition, under the Nordic Model the woman typically has more bargaining power, making the use of condoms more likely and violence less likely.

The Nordic Model makes prostitution-buying a criminal offence, with the key aim of changing men’s behaviour and social norms. It also criminalises profiteers, as required by binding UN treaties. When implemented well, it leads to stabilisation or decrease in the sex trade, rather than the rapid increase typically seen when countries liberalise it.

Other harms of prostitution

As the UN body concerned with health, the WHO has a responsibility to look at all of the risks associated with prostitution. These are not limited to HIV and other STIs, as serious as those are. Other risks include its inherent violence, injuries and damage to internal organs from mechanical trauma, damage to health and well-being caused by high stress levels, PTSD and other mental health problems, and an estimated mortality rate 40 times higher than the general population. For more on these health risks, see our Open Letter to the BMA.

The evidence suggests that full decriminalisation does little, if anything, to reduce these harms, and that nothing can make prostitution safe. Efforts should therefore be focused on reducing its scale. This requires changing men’s attitudes to buying sex, cracking down on profiteers, and implementing social and economic measures to address the poverty and inequality that drive women into prostitution. This is the approach that is mandated by the UN Palermo Trafficking Protocol. The WHO recommendations are in direct contradiction to this approach.

Undermining social stability and the status of women

In Not a Choice, Not a Job, Janice Raymond draws a parallel between the WHO recommendation and IMF economic policies that impede development in poor countries by eroding the social fabric. She explains that full decriminalisation also undermines social stability and the status of women:

“Where poverty, economic disadvantage, and even crass commercialism dictate that families encourage their daughters into prostitution, women bear the burden of providing not only for family essentials but also for family amenities at great cost to women’s health and well-being. Traditional relationships are broken down without a concomitant liberalization of women’s roles, women’s rights, and women’s social, economic, and political power. Instead, prostitution rigidifies women’s status as sexual objects and as instruments of sexual pleasure for men when they are bought and sold as commodities.”

Needless to say, the modelling studies did not consider these larger socioeconomic impacts, even though anything that reduces women’s status will inevitably affect an individual women’s negotiating position and therefore her ability to insist on men’s condom use.

Another omission was evidence that punters are more likely than other men to commit rape and domestic violence, and the impact of this on all women and children.

So how did the WHO get it so wrong? 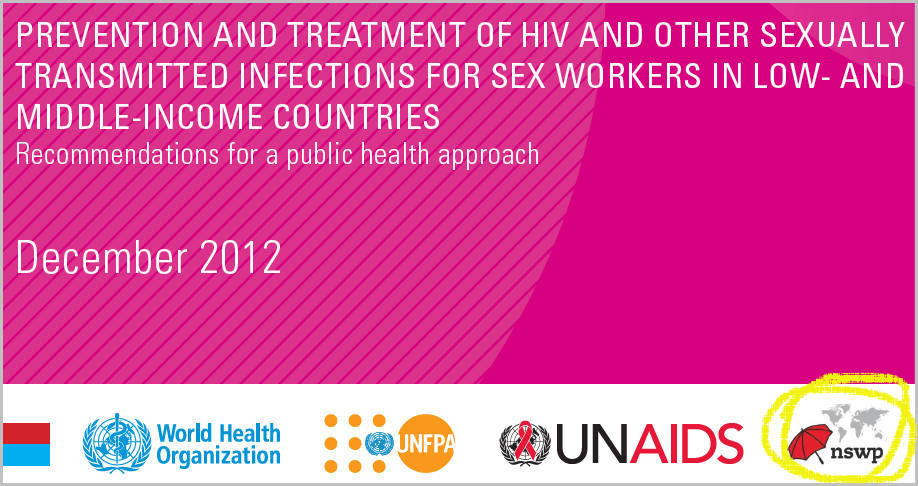 So how did the WHO get it so wrong? To answer this, we need to understand the history of the development of the current WHO guidelines, which are fundamentally unchanged since 2012. We draw on Kat Banyard’s important research.

“The World Health Organization led the development of the guidelines in collaboration with the United Nations Population Fund, the Joint United Nations Programme on HIV/AIDS (UNAIDS) and the Global Network of Sex Work Projects (NSWP).” [Emphasis added]

NSWP describes  itself as a “sex worker-led global network with 262 member organisations across 77 countries […] representing tens of thousands of sex workers.” It claims to have “a fundamental right to be involved in consultations around international and national policies that impact on sex workers’ lives and work.” [Our emphasis.]

This may sound reasonable. However, another page says members must endorse the following “core values:”

They define third parties as “managers, brothel keepers, receptionists, maids, drivers, landlords, hotels who rent rooms to sex workers and anyone else who is seen as facilitating sex work”, which clearly includes pimps and profiteers.

So while NSWP claims to represent “sex workers” in many countries, in fact it only represents organisations that support full decriminalisation. But many prostituted women – perhaps the majority – vehemently oppose this approach.

“I have experience within the sex industry – both ‘choice’ and forced. There are many of us. I have friends I used to ‘work’ with on the streets and in brothels who are still stuck and none of them want decrim. It would mean the end of exit opportunities.” – British woman who contacted us on social media

There are many reasons why most women and girls who are involved in prostitution or are survivors of it are not free to speak out publicly.

So NSWP is not representative of the opinions of all, or perhaps even most, of those in prostitution worldwide and it is dishonest to suggest otherwise. Moreover, the NSWP website says, “sex workers can be employees, employers, or independent workers and participate in a range of other work-related relationships with third parties.” [Our emphasis.]

In other words, it is an organisation in which “employers” (i.e. pimps and profiteers) are considered to be “sex workers.”

So perhaps we should not be surprised that NSWP lobbies for the decriminalisation of pimping or that, when it was advising on the WHO policy, its Vice President was a pimp. Her name is Alejandra Gil and she’s now serving a 15 year sentence for sex trafficking.

Gil was one of the “experts” who advised the WHO on its policy and is personally named in the Acknowledgements of the 2012 document.

So how on earth did the WHO get to be advised on its prostitution policy by NSWP? To understand this, we need to go back to 2007 when, as Kat Banyard explains:

“UNAIDS published a Guidance Note on how countries should respond to the HIV crisis in the context of a prostitution trade. They rightly concluded that to tackle the HIV crisis it was important to tackle demand for prostitution: ‘it is possible and timely to achieve social change, and consequently behavioural change among men, to reduce the demand for sex work.’ Unsurprisingly, this didn’t go down well with Gil’s organisation, which expressed its ‘concern’, via a working group, about the report’s ‘emphasis on reducing commercial sex’

Inexplicably, UNAIDS responded by appointing NSWP – which openly promotes pimping and brothel keeping as ordinary ‘work’ – as Co-Chairs of its new Advisory Group on HIV and Sex Work. A revised version of UNAIDS’ Guidance Note was duly published, this time carrying an annex prepared by the Advisory Group. It recommends: “States should move away from criminalising sex work or activities associated with it. Decriminalisation of sex work should include removing criminal laws and penalties for purchase and sale of sex, management of sex workers and brothels, and other activities related to sex work.” That report is now a go-to reference for groups lobbying governments to make pimping and brothel keeping legal.”

So an organisation that purports to represent marginalised people in prostitution around the world, but in fact lobbies for pimping to be made legal, while under the leadership of a pimp, managed to redefine the policies of both UNAIDS and the WHO so they now recommend the complete decriminalisation of the sex trade – in direct conflict with key UN human rights treaties. This is not unlike a tobacco industry mogul advising the WHO on smoking policy.

Kat Banyard rightly describes this as a human rights scandal. We join her in calling on the WHO and UNAIDS to take urgent action to address this scandal.

Those involved in developing policy and services around prostitution should never again rely so heavily and credulously on advice from NSWP and its member organisations, which in the UK include the English Collective of Prostitutes (ECP), National Ugly Mugs, and SCOT-PEP.