‘Alice’ sent this harrowing testimony about growing up in a UK children’s home through our Share Your Story page.

Former Liberal Democrat MP, the now thankfully deceased Cyril Smith, opened my children’s home sometime in the 1970s. A residential school for ‘emotionally and behaviourally disturbed children’, it was a kind of borstal in the middle of nowhere. One where kids were meant to be ‘helped’ rather than purely imprisoned and disciplined.

As one might expect, there was little help educationally or otherwise, and abuse was rife, as a police investigation called Operation Tweed would later find. Hundreds came forward about historical child abuse, with only the owner convicted by a jury of several assaults (a conviction later overturned by a single judge).

The children housed there were indeed mainly disturbed, almost all due to severe childhood abuse and neglect.

Several decades on, in 2001, Cyril Smith was still visiting. I didn’t know at the time who the mountainous man was at that year’s annual Christmas dinner. For a while I couldn’t stop looking at the huge gluttonous gold chain around his neck. It felt like it took up half the canteen.

Smith would spend nights in the boys’ section down the road (our section up the hill was mixed, boys and girls together, with the ‘worst boys’ in the manor building downhill). No one cared about the rumours of him sexually abusing the boys, especially not their absent parents and social workers. Smith apparently remunerated compliant boys with gifts. Though if they didn’t hide those gifts they’d get stolen by the other boys and battered for good measure.

We had our own systems of renumeration. In return for a £5 phone card to call my parents a boy named Luke would put his hand up my top for 5 minutes. I remember thinking, was each minute of speaking to my mother really worth each minute of his groping?

These sorts of currency exchanges were fairly explicit. No one would believe a child against a member of staff so it was an ‘anything goes’ culture. Another time, a staff member bargained with me that he’d allow me to recover sleep during the day (I had been made to face the wall in the Recreation Room all night for the crime of talking after lights out) if I gave him a blow job. That was a deal I couldn’t go through with.

One of my friends in this place, Jade, at 13 had a 35-year-old ‘boyfriend’, Victor. Jade would try to run away to Manchester to be with him. She’d make it about as far as the end of the woods or the local village, before someone would grass her up and she’d be dragged back kicking and screaming.

I was one of the few children who didn’t run away and sometimes felt ashamed of my cowardice.

Locals hated us and could spot us a mile off because we looked unkempt and uncared for. “Slags!” “Spazzes!” and an eclectic array of other insults were thrown our way by some particularly vocal villagers.

“Fuck off, nonce”, would usually silence them.

To be fair, it had been all over the local press that runaways had burned down the park’s public toilets and stamped some ducks to death at the river.

Jade hadn’t though. Her ‘boyfriend’ Victor told her he had ‘a job’ waiting for her. He’d send expensive gifts which we were all jealous of. “You’re so lucky” those of us whose parents never sent us anything would say. Obviously, I now realise he was grooming her and very likely the ‘job’ meant prostitution.

When you have nothing and everyone knows it, some quickly clock you’re in little position to say no. As a ‘looked after child’ (oh the irony!) you have zero leverage as no adult authority will ever back you up. Zero authority of your own.

Sometimes boys would steal girls’ phones and simply say “show us your tits and we’ll give it back”. This was normal and common. Staff would laugh when we told them about it.

Sexual access is always on the table, not in any necessarily formal sense, but when men know girls (and boys) are desperate to have something other than nothing, there’s an implicit prospect of sexual bartering. Desperation for love or attention coupled with the overwhelming likelihood no one would ever believe us about anything meant we all, unbeknownst to us, had big neon target signs above our heads.

My best friend from this period still feels confused as to how it was allowed for her son’s father to befriend her outside her next children’s home. Staff had seen him hanging around perched on the nearby fence for years. She was 15 and he was 35.

He had done the same almost a decade earlier at 26 with a 16-year-old girl who he went on to have 4 children with. That particular girl he had sold to friends of his for money.

She felt so special, she said, that he would take her out for dinner afterwards, that that feeling of being cared for, was enough to make her think sleeping with his friends was worth it. Only years later did it hit her that she’d paid for her own dinner at great cost.

Any girl, and most boys, growing up in care become targets for the sexual predation of adult men. But the care to prison pipeline and its offshoot into professional or ad hoc prostitution is often overlooked.

I wish more people would think about the lives of the children who matter least. If policy makers did that, they would acknowledge the limited options those kids have when growing up and implement real safeguarding measures.

A lot of the time surviving in the care system prepares girls for prostitution later. We all allowed degrees of sexual access to adult men for basics like food or clothing. Even beyond that most girls acquiesce to men’s sexual demands in return for things that make you feel like a ‘normal’ young teenager, but aren’t necessities.

That desire for normalcy, for anything that resembles a normal life, with a semblance of security, or pride in who you are, coupled with a wish to please anyone who treats you nicely because it’s so unusual for anyone to be nice to you, is a combination ripe for exploitation.

The weight of being unloved often means any attention is considered desirable and valued, even the wholly negative kind. Even if someone is sexually harming you, to do so means paying you acute close attention. In a world where sex is considered to be tied to love, unloved children will take whatever meagre scraps of what passes for love that they can.

The problem is that the sexual abuse of children is actually more like hate, and very far from love or care, but it takes a while to fully realise it at a young age when lacking much alternative. That’s why protection and safeguarding of children is so vital – so that children do not accept sexual predation as a disguised form of care and protection.

That sense of protection and care should be organised by state systems, but currently the situation is the total opposite. All our social workers knew about our sexual contact with adult men in return for the things most girls get from parents (cinema trips, takeaways, someone acting in a loving way towards you) and all could have stepped in – to stop the sexual abuse and try to fulfil the needs of care that children’s homes or foster families clearly weren’t managing. Social workers are overstretched, but I am still deeply scarred by the fact none to my knowledge ever intervened for any of us.

If anyone had even explained it was wrong or illegal for girls to be targeted by adult men for sex, it would’ve been news to all of us.

If you’ve been in the sex trade, or have been affected by it in other less direct ways, and would like to share your story anonymously, please see our Share Your Story page.

3 thoughts on “‘Any girl, and most boys, growing up in care become targets for the sexual predation of adult men’”

Register for our next webinar 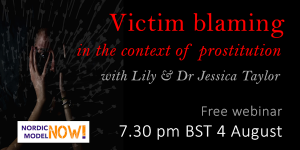