The Mainstreaming of Sexual Violence and Hazard

‘The Museum of Emotion’, a remarkable exhibition by the French artist Kader Attia which was put on the Hayward Gallery in 2019, explored postcolonialism and racialised oppression. A short film in it featured the artist describing how African slaves on ships bound for the Americas were required to perform dances and songs for their abductors and owners. He noted that the legacy of this continues today with entertainment and sport being amongst the few avenues through which African and Afro-Caribbean people are permitted to advance in Western society. ​ 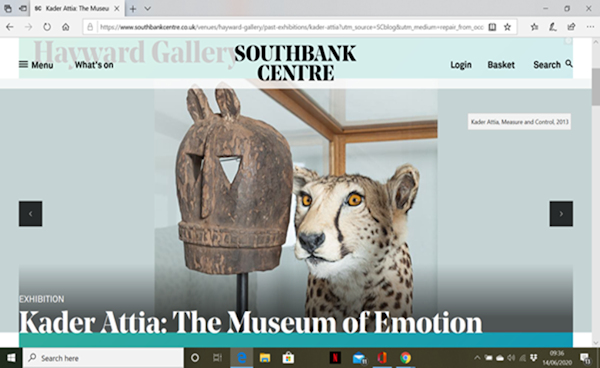 Jews in mediaeval Europe were similarly restricted to money-lending as the only trade they were permitted to enter because it was the sin of ‘usury’ for Christians. They had their possessions seized and were expelled by European rulers once their assets had been depleted, including by Edward I in England in 1290.

​Ferdinand the duck in the 1995 film ‘Babe’ points out that he crows every morning like a rooster to wake people so that he will be considered useful and be spared from being eaten.​

​The roles women have performed in society have been dictated by similar mechanisms of oppression supported by legal systems, the enforcement of social and religious ‘norms’ by state and non-state actors, and the use of actual and threatened sexual and physical violence carried out with impunity. ​

​The global onslaught of online sexualised violence, competing for clicks with acts of destruction, torture and murder, its enactment against prostituted women and men, and its mainstreaming as part of a ‘bucket list’ of steps in a sexual apprenticeship dictated by untouchable, global corporations, has severe consequences for both women and men.

What is ‘choice’ and what is performing to survive?

Online depictions of sexualised violence create expectations in viewers which greatly underestimate the risk of pain, serious harm or even death that the acts depicted can carry if emulated in real life.

Many young women who contacted the We Can’t Consent To This campaign said they felt pressured to go along with ‘rough sex’, including strangulation, for fear of being labelled ‘prudish’.

This false assumption means that women who have left the industry and have relationships with men who pay for sex often find that the men expect them to perform in their intimate lives in the same way they previously did for financial reward. 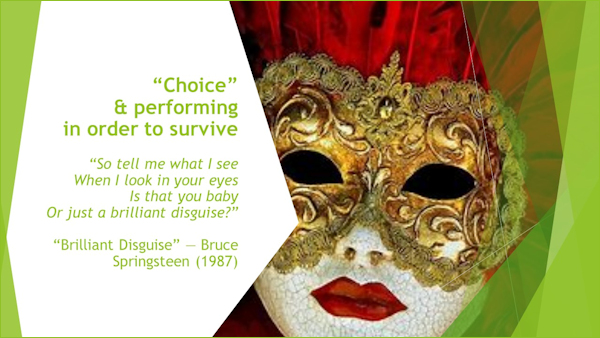 At a gig I attended last year a man behind me was mobbed incessantly by people asking him to speak in the voice of a homicidal villain he plays in a popular series about organised crime. It became too much for him and he had to walk away. I read later that calls to him from strangers in the street and in passing vehicles had frequently left him very anxious about leaving his house.

This has been the experience of several male friends of mine who are survivors of the same industry as much as it has been mine. My male friends, however, struggle to find a public voice for fear of ridicule from other men.

When the former MP, Keith Vaz who chaired an inquiry into prostitution, was recorded describing sex with a male novice to prostitution as ‘breaking’ him in, ‘breaking’ in a different sense was the correct term.

A senior dancer at Spearmint Rhino I met a few years ago never wore make-up and always wore casual clothes in private. Her aim was to live on a farm and look after animals. Having been ‘promoted’ to work with a boxing promoter she then travelled round the country, calling at random times in the early morning because she had once again regained consciousness in a hotel room, bruised, in pain, and uncertain where she was.

I was introduced to the website I worked on as a prostitute by a woman who, to the outside world, was a successful glamour model. It did not pay her rent. She had the misfortune to be on the books of a ‘high-class escort agency’ well connected with both the police and the tabloid press. The agency owner used these connections to manipulate and threaten the women working for her. On fleeing a five-star hotel on Park Lane in fear of her life after being beaten up by a guest there my friend had money deducted by the agency owner for having failed to stay to the finish.

It is common for men who pay for sex to see themselves as having a friendship or connection with a prostituted woman they see regularly. This misconception ignores the power dynamics within a sexual encounter based on financial reward and the fact that the woman is performing a role. It is also a red flag for prostituted women, often accompanied as it is by attempts to manipulate women into accepting lower sums for the sake of ‘friendship’.

In Louis Theroux’s recent documentary about prostitution, the concerned look on the face of one of the women featured when her client spoke about being her ‘friend’ was something I recognized.

In psychotherapy and counselling there are professional boundaries observed and acknowledged between therapist and client. Prostitution is not a form of therapy. There is no supervision for women involved with it, who are more likely to encounter social workers. Repeating or escalating acts of sexualised violence against women is not personal growth. ‘Kink as therapy’ carries high risks of exploitation. Boundaries in therapeutic settings are there for a reason.

I once received a call from a prospective client who was 18 years old, had no sexual experience, and was shortly to have an arranged marriage to a woman of the same age. He was concerned about his wedding night and wanted to meet me so that I could ‘teach’ him Western sexual practices.

Several times while we were speaking he stopped and said, “but it’s haram, isn’t it?”

I was not only seeking to avoid prescribing a synthetic sexuality, but also wanting to avoid visiting on someone else the trauma a close friend of mine endures because his absent father re-appeared when he was not yet a teenager, told him it was “time he became a man” and took him to a brothel.

The abuse he experienced in those circumstances was repeated with older women for whom, as a champion athlete, he was subsequently ‘sport’. This greatly damaged his capacity for intimacy and physical contact that didn’t involve sex and made sex something that put him in a state where he was a danger to himself afterwards.

The aristocratic fathers who sent their nervous teenage sons to visit women in Mayfair similarly passed on the baton of emotional illiteracy and sex as ritual performance.

I was also aware of many instances in which men who visited prostituted women subsequently blamed the women for ‘corrupting’ them and carried out horrific acts of violence on others as a result.

Many men I interacted with sought role plays in which it quickly became apparent that they were victims of serious sexual abuse and were re-enacting these events. They would do so repeatedly on subsequent occasions. These were acts of reinforcement, not therapeutic explorations.

Some drugs used recreationally during sex anaesthetise users to the levels of harm being inflicted on them during acts of sexualised violence. Drugs like cocaine can also impede ejaculation and drive men to more extreme acts as they attempt to resolve this.

At the same time they step back from criticising acts of extreme violence which clearly violated ‘norms’ and resulted in serious injury or death because that would amount to ‘kink-shaming’. This does not inspire trust in them as providers of instruction and guidance.

I know several women who, for a variety of reasons, find pain arousing. Not one of them would consume large quantities of a known anaesthetic such as cocaine, or alcohol in advance of a sexual encounter which was likely to involve the administration of violence. This would be counterproductive, diminish their arousal and impair their judgment.

A pinwheel is not designed for internal use and is very likely to cause serious injury if used that way, as would be obvious to anyone with a passing knowledge of the fragility of vaginal membranes and their proximity to major blood vessels.

A group of law academics at Bournemouth University recently published a blog making the interesting argument that a bespoke criminal offence, such as ‘causing death by dangerous sexual activity’ (along the lines of the existing offence of ‘causing death by dangerous driving’) with a provision that consent to that activity would not be a defense, would be a more effective way of addressing problems with the English criminal law where fatal acts of sexualised violence are concerned than trying to eliminate possible defenses.

Men seeking to defend ‘rough sex’ practices frequently refer to fantasies involving non-consensual sex which some women have. This is seen as an argument that women with these fantasies necessarily seek to experience them in real life.

There are several porn-driven fantasies men who pay for sex seek to emulate which many of them are incapable of enjoying or performing in reality. ‘Double penetration’ was one of the most common in my experience. Apart from being an act designed for visual effect and gymnastics rather than practicality or pleasure, it involves two men’s bodies being in skin-to-skin contact during an act involving sex. For many heterosexual men this feature alone ensures that it will remain forever an event of the imagination.

Urinating on a woman is another act some men who fantasise at great length are unable to carry out in real-life encounters because a taboo defeats their desire for it. The same can also be true of acts involving contact with faeces because of the smell.

Online porn’s extension of what constitutes ‘sex’ to include exposure to faeces or vomit is taking place as the WHO and other health organisations warn repeatedly of the threat to humanity posed by microbial resistance to antibiotics. It takes 10,000 generations for a beneficial mutation to extend through a population. An asexually reproducing bacteria such as e-coli, for example, covers 10,000 generations in about two weeks.

I was vaccinated against cholera as a child because of risks from untreated sewage in the city in which I grew up. When I visited a clinic to request a vaccination because I frequently had contact with clients who travelled frequently, it was clear to me that staff there had a limited understanding of the bio-hazards associated with some porn-derived ‘modern sexual practices.’

‘Group sex’ encounters involving multiple men and a single or smaller number of women are often arranged to initiate newcomers into a group and bind them to the other members, whether as a social network where it resembles ‘hazing’ or as part of a criminal enterprise.

The need to demonstrate ‘masculinity’ in a group situation can over-ride boundaries an individual might have observed outside the group. I was involved in group situations on several occasions in which it was clear that some of the younger men involved feared humiliation within their group if they were seen to participate by others. On only one occasion were a few young men able to resist that kind of peer pressure. It would of course be the woman present who would be blamed later for what took place there.

Rates of post-traumatic stress disorder (PTSD), a mental health difficulty stereotypically associated with combat veterans, are in fact much higher in women in prostitution, particularly if the women are involved in street prostitution.

There need to be alternatives to performing in order to survive.