Press Release from the Not Buying It campaign

The ruling came after six months of deliberation, including a special Round Table meeting, following a formal complaint raised by pressure group Not Buying It, www.notbuyingit.org.uk.

However, bizarrely the ASA ruling on The Sport is an industry-wide decision which applies to ‘real’ newspapers. This includes papers like the Evening Standard and Metro, freely distributed throughout London Transport and viewed by millions every day.

Even more shocking is the fact that The ASA Council includes child protection experts, who are well aware that such material is routinely used to groom children with.

Not Buying It is not the only one shocked by this decision: 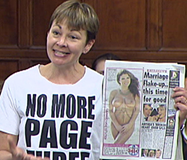 For human rights groups, perhaps the greatest irony of all is that this ruling follows hot on the heels of an ASA probe into sexism in advertising.

“No wonder sexist ads are the most complained about category of advertising (second only to the sexualisation of children) if the ASA thinks it’s OK even for newspapers to peddle prostitution.”

Michael Conroy of A Call To Men UK works with men and boys to end abusive attitudes towards women:

“Change can only happen when the media and popular culture stop bombarding men and boys with demeaning messages about women and stop shoring up hyper-macho stereotypes about men that boys are exposed to, everywhere, from the day they are born”

Over a dozen rights groups and individual experts have signed up to Not Buying It’s recommendations to the ASA to introduce new, meaningful regulation over the sexualisation of women. This includes ending the advertising of the pornography and prostitution in the public domain, such as newspapers or unrestricted internet sites.

“ASA codes have pages and pages of rules on how every imaginable type of potentially harmful, age-restricted industry like alcohol and gambling should be advertised. Yet there isn’t even a cursory mention of how promotion of two of the most harmful businesses on the planet, pornography and prostitution, should be regulated.

This is despite the overwhelming levels of harm associated with these industries for the women working in them and in the attitudes they promote towards all women. This is despite the Metropolitan police urging all newspaper editors to cease carrying ads for the sex trade because of their strong links with trafficking. It is despite the fact that many of the ads are likely to be advertising an illegal activity – sex with a women forced or coerced into prostitution”

Ads for porn and prostitution are simply the most obvious example of what comes out of the tired, male-dominated advertising world racked by sexism in the work place and ruled by antiquated and long-disproven myths like ‘(female) sex sells’. The situation is so dire that research by Unilever shows that only 3% of ads present woman as intelligent human beings.  Something directly contributed to by Unilever itself with its notorious objectifying Lynx ads of the lads mag era. “Unilever has now committed to ending sexist advertising. Unfortunately few other industry players, and certainly not the regulator, have followed suit” says Rakoff.

“The ASA needs to follow the lead of London Mayor, Sadiq Khan, who within days of coming into power condemned the hated ‘Beach Body Ready’ ad, tightened up advertising on the London Transport network and banned ads for pornography and prostitution”.

Do you think Newspapers should advertise pornography and prostitution? Have you say here: www.notbuyingit.org.uk/Vote