The New Zealand government crime data for the years 1994-2014 is available at http://nzdotstat.stats.govt.nz/wbos/Index.aspx?DataSetCode=TABLECODE7407.

For each year, there are totals for apprehensions, and recorded and resolved offences, broken down into various categories. There is not a separate category for domestic violence – which is also sometimes known as intimate partner violence, family violence, or sometimes male violence against women and girls (VAWG), although the latter is not restricted to crimes within families. These crimes are coded into other categories, as appropriate.

In this article we will focus on recorded offences, and, for simplicity, we’ll ignore the data prior to 2000. The Prostitution Reform Act (PRA), which fully decriminalised the sex trade, was passed in late June 2003, so this means we’ll look at data for a full three and a half years before the law was changed.

If we plot the total reported crime figures for the period 2000-2014, we can see that there was an overall decrease in crime during this period, in spite of an increasing population. 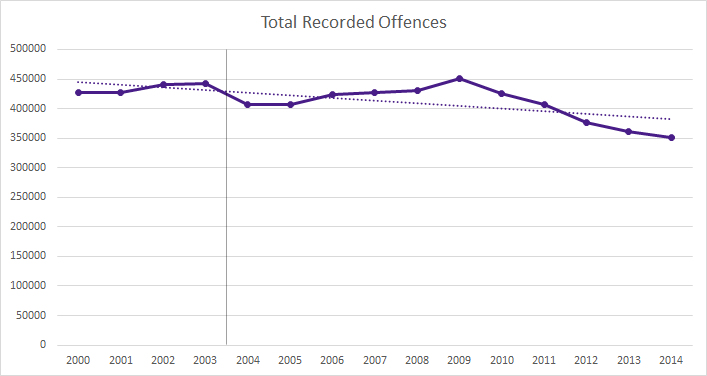 The first two of these categories are likely to include some domestic violence and other VAWG offences.

The rise in the “Sexual assault and related offences” category is more obvious when plotted separately:

As mentioned earlier, nearly all of the other categories show a decreasing trend. For example, here is a selection:

It is well accepted that rape, domestic violence, and other VAWG offences are generally under-reported to the police, and that levels of reporting of these crimes are affected by changes in education and awareness, and how well victims expect their complaints to be dealt with. These and other issues make it difficult to compare rates between countries. However, here we are looking at trends within one country during a time period in which, as far as we are aware, there were no great changes to the way rape was handled, how these offences were coded, or in education and awareness on these issues.

While nothing definitive can be deduced from the police records without further studies, the information is indicative of a rising trend in the “Sexual assault and related offences” category and two other categories that domestic violence offences are likely to be coded into, and that this started shortly after the introduction of the PRA. That this happened during a time period when other crimes were generally decreasing is particularly significant and leaves little doubt that rape and domestic violence were increasing during this period.

There is anecdotal evidence that the severity of domestic violence offences has also increased. For example, a 2013 New Zealand Woman’s Refuge article reports an increase in very severe domestic violence:

Women’s Refuge has noticed a worrying increase in the number of particularly cruel and brutal incidents of domestic violence.

“I am deeply concerned to have brought to my attention a growing number of violent acts that are extraordinarily severe,” says Women’s Refuge Chief Executive Heather Henare.

“Many of our Refuges are reporting this trend. The reasons for this increase are unclear but certainly the use of weapons such as knives and guns are commonly reported to me, alongside other hideous methods of abuse such as inflicting burns.”

A New Zealand Herald article earlier this year reported that “New Zealand has the worst rate of family violence in the developed world. It costs us up to $7 billion a year.”

Taken together the above is evidence of a rise as stated in the first part of the meme:

“Since full decriminalisation of the sex trade in 2003, New Zealand has seen a huge increase in domestic violence and rape.”

This does not prove that the PRA caused the rise, and the meme does not claim that it did. In social science, it is almost impossible to prove a causal link of this kind. The meme claims that the rise is related to the normalisation and acceptance of attitudes that women are commodities or objects for the use of men.

When a society considers something to be unacceptable, it creates rules and laws against it. If it subsequently removes those rules and laws, it sends out the message that it now considers those things to be acceptable. There is no doubt, therefore, that the full decriminalisation of the sex trade (as implemented in the PRA) sends out a message that buying women to use for sex is acceptable and so is profiting from this use of women as commodities. And it is more or less inevitable that this official sanctioning leads to more men buying women for use in sex, and doing so more frequently.

Recent US research that compared men who buy sex with men who don’t, found those who buy sex are more likely to admit having committed rape and other aggressive sexual acts. The corollary of this is that any increase in the number of men buying women for sex will invariably lead to an increase in sexual and domestic violence.

There are a number of internet forums for men who buy sex (punters). On these forums punters can rate the women they buy and enter free-format accounts of their prostitution encounters. Our research on one such forum shows punters to be selfish and narcissistic, that they have little or no respect for the women they buy, and that they buy them to feed their entitlement and build up their egos. Their own words make it clear that they consider the women to be objects for their own use and gratification. They seem oblivious to the fact that the women are human beings just like they are, with similar hopes, dreams and vulnerabilities. These attitudes are bound to affect how they treat all the other women and girls they encounter in their daily lives.

It is on this understanding that the second part of the meme is based.

“This is related to the normalization and acceptance of women as objects for use, abuse and discard.”

We believe that the increase in violence against women and girls in New Zealand since the full decriminalisation of the sex trade there, and the likely impact of the law change on male attitudes to women and girls is an argument for the Nordic Model. This fully decriminalises the women and others who are in prostitution, provides them with holistic services to help them build a new life outside, and makes buying a person for sex a crime – to send out a strong message that this is not acceptable in a society that cares about women’s human rights and equality.

Many thanks to Julian Vigo for help with understanding the uses and limits of the data upon which the first part of this post is based.

4 October 2018: We recently looked into updating this post with the latest crime statistics. However, New Zealand has changed the way they handle crime data so it is not possible to validly compare figures before and after 2014. However, this article remains valid in providing a snapshot of the first full decade after the introduction of the PRA.