This article draws on the report of a recent Scottish inquiry into prostitution advertising websites. We have included quotes from the report, some of which have been edited for length.

1. Screening options are a chimera

Most adverts on most of the large prostitution advertising websites include contact details for the woman being advertised (or her pimp) and these are visible to anyone viewing the advert – regardless whether they are registered on the website and logged in or not – meaning that anyone can get in touch to book an appointment without any online screening whatsoever.

Even if the punter does register and create a profile for himself, he doesn’t need to show any photo ID and if he gets a bad review, he can easily make a new profile under a new name. But anyway, as the report notes, an absence of bad reviews does not ensure that he will be ‘safe’.

Valiant Richey, OSCE Special Representative and Coordinator for Combating Trafficking in Human Beings, who gave evidence to the inquiry, said:

“I often hear that these sites are safer. They are not. They are easier. And easier is not the same as safer. The problem is that just like on the street, nobody knows who the buyer is, and a good buyer today can be a bad buyer tomorrow. There is simply no way to eliminate violence from this industry and the websites do not help do that.” [Page 17]

This concentration means that advertisers can quickly and easily reach huge numbers of potential customers. A single advertiser can post adverts for multiple women, and while a photo of each woman’s identity documents needs to be shown, checks are lax and there is no way to ensure they are real or actually belong to the woman being sold behind the advert. There are confirmed cases of pimps selling children behind adverts purporting to show adult women.

Punters can search the adverts by location and advertisers can easily change the location if, for example, the woman moves from one massage parlour or pop-up brothel to another.

Features that enable punters to leave reviews for those being sold are an opportunity for punters and pimps to control and harass the women.

All of this makes it incredibly easy for someone to set himself up as a pimp and to make a huge profit quickly and easily. He simply needs to find a vulnerable girl or young woman and place an advert and watch the money start to roll in. And there’s nothing to stop him pimping multiple girls and young women and selling them multiple times a day and night.

Pimping is an incredibly lucrative occupation and it carries few risks in countries like the UK where laws against pimping and trafficking are lax and poorly enforced.

3. These websites have led to a huge expansion in the sex trade

The big prostitution advertising websites facilitate third parties bringing new women and girls into the sex industry and have significantly lowered the barriers to getting started. As the potential profits are eye watering, mostly with very little risk, it is no surprise that there has been a huge expansion of the sex trade coinciding with the development of these sites over the last decade.

The scale of pimping and human trafficking that takes place through these websites vastly outstrips the capacity of any police force to deal with appropriately.

It is often said that these sites aid in the enforcement of laws against pimping and trafficking. The inquiry found that this is a complete misconception. Valiant Richey said:

“The problem is that these sites are facilitating an expansion of scale far beyond police resources or knowledge or capacity. So this argument is false, because it suggests that you should leave those sites in place to help law enforcement – and that is completely ridiculous because of the volume we’re talking about… How do we know that they can’t handle it? Because if they were making a dent in the problem the traffickers would go somewhere else, and they’re not.” [Page 22]

While some adverts contain indicators of pimping and trafficking, most pimps and traffickers quickly learn how to cover their tracks. For example, just like drug dealers, they make extensive use of burner phones so each woman they are advertising has a different phone number. Just because an advert has no discernible evidence of pimp or trafficker involvement, it doesn’t mean that the woman being advertised is truly independent.

4. Website operators gain influence by partnering with the police

The inquiry uncovered shameful evidence that UK law enforcement authorities consider these websites to be part of the solution to sex trafficking and collaborate with them extensively. This then enables the companies that run the websites to use their relationship with law enforcement to enhance their status and gain credibility – and to lobby for legislation and policy to their benefit.

The websites are themselves enabling and profiting off the prostitution of the women being advertised. In other words, they themselves are pimping. That UK law enforcement agencies are considering them partners in the fight against pimping and sex trafficking reveals that we are in an Alice in Wonderland twilight world.

5. The idea that closing these websites would drive the industry to the dark web is a fallacy

It is frequently claimed that if the prostitution advertising websites were closed, the level of demand from men would be unchanged and the industry would simply move its operations elsewhere – to the dark web, for example – and this would be put the women in additional danger.

Valiant Richey brilliantly explained to the inquiry why this claim is false:

“The problem with that argument is that it assumes a constant size of the market. When the street moved to the internet the market grew because it’s easier. It is not correct to assume that when you shut down the sites the entire market is going to move back to the streets. That’s just not how it goes, because there is so much [of a] barrier to using other methods. The market is going to shrink in the same way that it expanded when it went to the internet. That’s why this argument is again fallacious.”

The dark web is less accessible than the open web – so even if some adverts did move there, there would not be the same scale effect that there is on the big websites on the open web. Law enforcement and support services would still be able to find them just as the punters can – but as the scale would be smaller, they would have a better chance of dealing with them appropriately.

Prostitution-buying is in many ways opportunistic. When it is blatantly in front of us and we are surrounded by adverts that are condoned and tolerated by the authorities, it normalises prostitution-buying and send out the message that it is acceptable – which leads to more men succumbing to this behaviour.

If advertising didn’t work to change our behaviour, we would not be exposed to around 4,000 to 10,000 adverts each and every day.

Evidence from both France and the US, shows that when effective laws against these websites are introduced, the size of the industry decreases significantly.

Lorraine Questiaux of Mouvement du Nid told the inquiry that after the law was introduced in France to shut down online prostitution adverts:

Valiant Richey said of the US:

“Governments should really be considering policy options to shut down these sites as quickly as possible. SESTA-FOSTA, the bill in the United States, is the best example of that. That bill passed and the market declined by 80% in 72 hours. We documented the data. 80% decline in 72 hours. I’m not aware of any anti-trafficking legislation anywhere in the history of the world that had such an impact on the market in such a short time.”

Richey went on to say that introducing such legislation must be combined with the introduction of services to help those caught up in the industry to survive the transition financially and build a good quality of life outside prostitution.

Research a year after Backpage was closed and SESTA-FOSTA was passed found that the reduction in the market had persisted.

6. Why are these adverts treated so differently from ‘sex for rent’?

Why then does the CPS not issue similar guidance about the big prostitution advertising websites? Could it be because there has been more public outrage about ‘sex for rent’ adverts?

If so, why is public outrage so much greater for ‘sex for rent’ adverts than the ‘sex for money’ adverts on AdultWork and similar?

Is this because there is a perception that ‘sex for rent’ affects middle class women but the pimping on AdultWork is confined to much more marginalised women and girls? If so, this reveals some unsavoury aspects of our society.

7. Relevant laws were drawn up before the advent of the Internet

Laws in Scotland relating to prostitution and pimping predate the development of the Internet as we know it. The same is true for England and Wales. There is an urgent need to update the law to reflect recent technological advancements and to bring the law into line with international obligations.

We must update the law to prohibit all third-party profiteering from women and children’s prostitution, including prostitution advertising websites, as required by CEDAW and the first optional protocol to the UN Convention on the Rights of the Child.

The inquiry report has shown that these websites directly increase the demand for prostitution buying. Shutting them down is therefore required for compliance with Article 9 of the Palermo Protocol, which requires ratifying countries to “to discourage the demand that fosters all forms of exploitation of persons, especially women and children, that leads to trafficking.”

Such measures must be combined with real measures to address women’s poverty, inequality and disadvantage and the provision of high-quality services to enable women to transition out of the sex industry and rebuild their lives – as also required by Article 9 of the Palermo Protocol.

Prostitution advertising websites pose a real and serious threat to the safety of women and girls everywhere, but especially to those who are marginalised in any way – because they make it so easy for pimps and traffickers – who are continually looking for new women and girls to entice or coerce into the industry so that they can profit from their prostitution.

The public purse is left to pick up the tab of the broken lives and the increase in male violence against women and girls (VAWG) that is inevitable when prostitution is rampant – because prostitution feeds men’s entitlement – the very attitude underlying VAWG.

It is beyond time that pimps, traffickers and sex buyers were held to account for the havoc they cause. 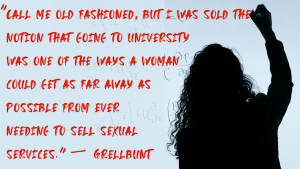 Register for our next event 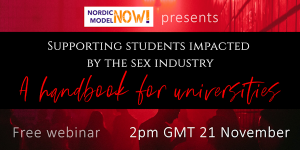